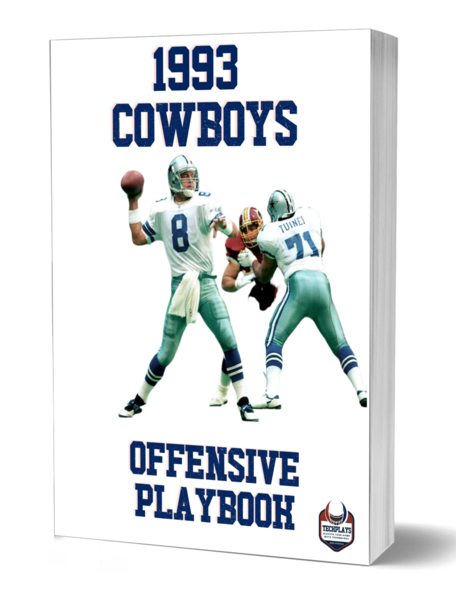 The Dallas Cowboys of 1993 were a force to be reckoned with on the offensive side of the ball. Led by quarterback Troy Aikman, running back Emmitt Smith, and wide receiver Michael Irvin, the Cowboys' offense was one of the most prolific in the NFL.

Aikman, the quarterback, had a stellar season in 1993, throwing for 3,100 yards and 23 touchdowns. He also had a passer rating of 96.6, which ranked him in the top 10 among NFL quarterbacks. Aikman's leadership and accuracy were key to the Cowboys' success on offense.

Emmitt Smith, the running back, was a powerhouse for the Cowboys in 1993. He rushed for a league-leading 1,486 yards and 14 touchdowns. Smith's ability to break tackles and gain yards after contact made him one of the most feared running backs in the league. He also caught 39 passes for 259 yards and 1 touchdown.

Michael Irvin, the wide receiver, was Aikman's go-to target in the passing game. Irvin caught 93 passes for 1,396 yards and 8 touchdowns, earning him a spot in the Pro Bowl. Irvin's speed and agility made him a difficult matchup for opposing defenses.

The Cowboys' offense also featured a strong offensive line that helped open holes for Smith and protect Aikman. The line was anchored by Pro Bowlers Mark Tuinei and Nate Newton, who helped pave the way for the Cowboys' rushing attack.

In addition to the individual talent, the Cowboys' offense was also well-coached. Head coach Jimmy Johnson and offensive coordinator Norv Turner put together a game plan that highlighted the strengths of the Cowboys' players and put them in position to succeed.

The Cowboys' offense was a major reason why the team won Super Bowl XXVIII that year. They were able to score points in bunches, and their balanced attack kept opposing defenses guessing. The 1993 Dallas Cowboys will always be remembered as one of the best offensive teams in NFL history.